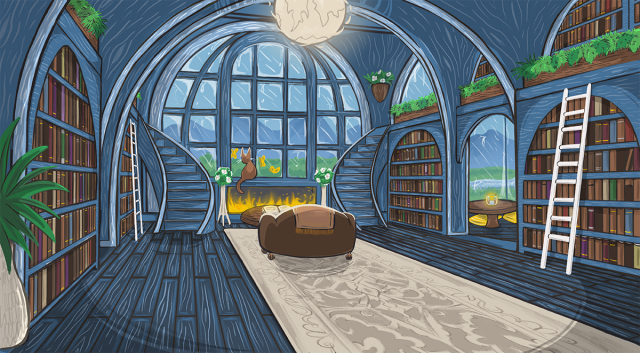 Ever since I saw Beauty and the Beast as a young girl, I fantasized about having a grandiose library of my own. With a little bit of pixie dust from 3D modeling software Blender and the drawing app Procreate, I set out on a quest to design the library of my dreams.

Getting the Ideas Out

After researching libraries, I did a super rough sketch in Procreate to figure out how I wanted everything to look. I didn’t worry too much about perspective or getting things to look perfect, I just wanted to get a feel for the general shape and colors of the library.

The next thing I did was make a super basic 3D-modeled version of the library in Blender. I focused on creating objects with basic shapes like the bookshelves and saved the more complicated shapes for importing free assets into Blender or drawing later.

Once I completed 3D modeling, I positioned the camera to my liking in Blender, took a screenshot, and started tracing over the screenshot in Procreate. I also created other objects using the perspective tool in Procreate that I didn’t model like the chair and arches.

The next step was figuring out what colors I wanted to use. At this stage, I experimented A LOT. I used the Instagram poll to lead some of my design decisions like which color I should make the wood (blue or brown) and what objects to include (like the book).

Finally, I sprinkled the final details like the carpet, ladder, and lighting. For the carpet and ladder, I first created a 2D image of the object and then used the Distort tool in Procreate to match the perspective.

Once all of the details were finished, I was done. Now I need to design the library cards and how it looks during different seasons…stay tuned!

No comments to show.